Pinelopi Makrodimitris, Tom Karvanis, and Angela Nikolakakos (President of the Hellenic Canadian Lawyers Association), organized a special two day event in Ottawa for Hellenic Canadian lawyers. On Friday September 18, 2015, a cocktail reception was hosted for members of the association by Greek Ambassador, Mr. George L. Marcantonatos, at his residence. On Saturday September 19, 2015, members of the association received a special guided tour of an exhibit at the Canadian Museum of History entitled “The Greeks – Agamemnon to Alexander the Great.”

Dr. Terence Clark, curator for the Canadian Museum of History, lead the tour and provided association members with an inside look at the exhibit. It is through this exhibit that over 500 priceless artifacts, garnered from 21 Greek museums, came together for the first time in North America in an unparalleled chronicle of 5,000 years of Hellenic history. In attendance at the events were association members from Toronto and Ottawa, as well Justice Andromache Karakatsanis of the Supreme Court of Canada. 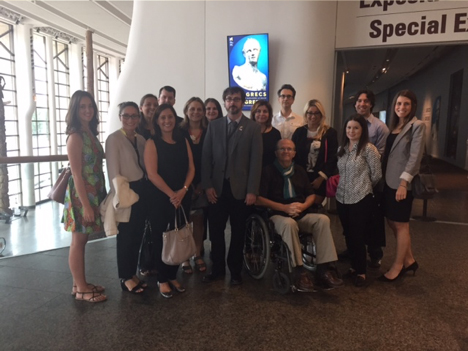 RBC Race For The Kids